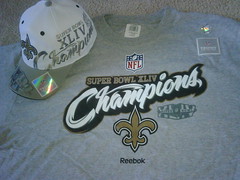 The New Orleans Saints are in a weird situation.  They have a problem because a former employee attempted–according to them–to blackmail them with this “vicodin theft” and how they tried to cover it up.  Well, now he’s gone public and things are weird in NOLA.

Now, the Security Director who is at the center of this lawsuit is suing the Saints because he says he quit over the cover-up of this vicodin theft and now he wants to get paid.  Getting paid I can understand, but the Saints saying he tried to blackmail them?

You see, this is where things get hairy and Roger Goodell DOES need to step in and make this right.  This guy is alleging that Sean Payton was one of the people who stole the vicodin.  REALLY?

So, now he’s called Sean Payton into question, the Saints claim he tried to blackmail them, and Payton denies the whole.  The NFL has its own security department and I think they need to look into this.

Let’s say these rumors are false–then Goodell needs to make sure everyone know that.  The Saints being exonerated cannot be an 11th page/one paragraph story.

Every day it seems we’re faced with more bad press for the NFL and I don’t think it’ll end anytime soon.  However, Roger Goodell can fix that by making sure the security staff of NFL team are totally accountable.  For example, how did the Saints try to cover this up and this dude never told the league?  That’s weird?  Does he have an outlet to tell the league?

I imagine he does and he’s lying and the Saints are innocent, but if the NFL security system is broken–Goodell needs to fix it now.