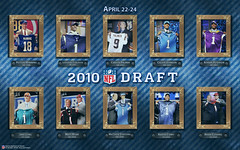 The Jets took USC’s Joe McKnight in the 4th Round and now they have a running/passing threat coming out of the backfield.  This basically makes things more unfair for them since they have LDT, Shonn Greene, and now they’ve just drafted Joe McKnight.  They will hit the field with the best offense in football on day one next season.

Taylor Mays got drafted by the 49ers after he was passed over by Pete Carroll and the Seahawks and now he’s got some problems with that.  I’m not understanding where these don’t understand that they don’t have to have their butts kissed every second of every day, but now that Mays is in San Fran he better get ready to stop complaining because I’m already mad that he a 49er.

So his gripe with Pete Carroll is that Carroll didn’t live his live for him:

“He is someone I’ve trusted for a long time, been very close to.  I put my future in his hands when he told me to come back to school. I just feel like we weren’t on the same page for what I needed to do to get drafted where I wanted to be drafted.”

This seems to be the pattern with Carroll.  He says one thing, does another, buys Reggie Bush a house, gets away with it, and then says, “Oh well”.

I almost feel bad for Taylor Mays, but then I remember that he went to college for free–something most people can’t do.  So, my advice to you Taylor is–get over it.