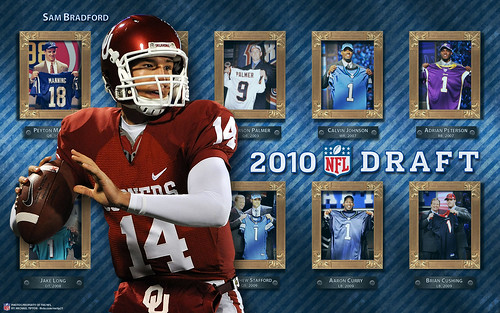 Because they haven’t made up their minds to pick him yet.  The Rams are still going all wishy-washy because now they’re getting cold feet thinking “What if he isn’t the one?”.

The Rams are in that delicate place where they just aren’t sure what to do.  Also, they are not sure how much money to give this kid.  We know his agent will ask for a certain amount of money, but maybe they’re holding back to see what another high draft pick gets or they’re thinking they don’t want to make the pay scale so high and they’re holding off because then they’d be the story of the NFL for a month if they didn’t give him a ton of cash.

Now, if the Rams are unsure whether he’s “the guy” then they had better be on the phone trying to trade this pick.  If they’re unsure of how he will be able to start from day one then they need to find other pieces to go around him.  If they don’t want to unload a bunch of cash on him then they need to get in line.

Actually, I think they have no clue what to do.  They are thinking, “We can’t sign him now–what if we’re wrong” because Billy Devaney is freaking that he’ll get fired.  He KNOWS that Steve Spagnoulo is going to get a pass for a couple years because he’s a defensive coach with no offense and that makes it hard.

However, Devaney is afraid if he misses then that’s it–he could be fired curing the season.  So, he’s cowering for his own job.  Now, I don’t blame him for being nervous, but you have to at least take the first step.  Holding back is only going to make things worse.

Or Bradford is being difficult–wouldn’t that be hilarious?
photo credit: RMTip21