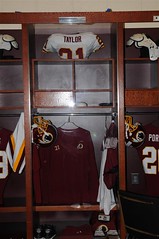 Santana Moss isn’t talking to the Redskins, but he is talking to his teammates and Mike Shanahan.  The latest word is that Moss did meet with Canadian Doctor Anthony Galea, but that his treatments were normal and that he wasn’t–to his knowledge–using illegal substances.

I’m surprised that we havne’t seen word of a meeting between Dan Snyder and Moss, but perhaps this will do just fine.  He spoke to his teammate Phillip Daniels:

“I believe he’s telling us the truth.  He got, like, three treatments, and who knows what happened after that.”

“They stopped somebody at the border who had stuff — who knows who they were going to see?”

“Maybe they were coming to give [Moss] another treatment. … It’s kind of tough, man, but I believe in him.”

When he spoke to Mike Shanahan I suppose Mike was satisfied with Moss’ explanation.  We know Mike is pretty calm, but if he were pissed he’d let us know it.

“I sat down and talked to Santana today and went through a bunch of situations that have happened to him.  And I feel really good about where he’s at. I feel real good that he’ll be, I don’t know if ‘vindicated’ is the word, but when people find out all the facts, everything will be OK.”

If Mike Shanahan believes him then I would feel pretty confident in Moss’ chances of not getting fined or suspended.  However, Pacman Jones got suspended for a year for being stupid.  So, maybe Mike is just being optimistic for the press.

Regardless of what happens Phillip Daniels has some words of wisdom for us.  He believes in his teammate but he isn’t stupid either:

“That’s a lesson for everybody.  Make sure you know who you’re working with, go through your trainers and get the right people. And if they’re going to work on you, maybe bring them here, bring them to the facility, let the guys see what they’re doing.”