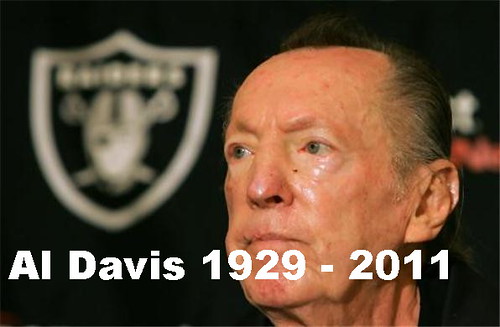 The owner of the Oakland Raiders, Al Davis, has died at the age of 82 and football has lost one of its most colorful figures.

Over the last few years, most of the conversation about Al Davis has centered on the questionable decisions he made and the direction in which he took the team.  Many people blamed the Raiders fall from football prominence directly on Davis.  A lot of this may be true, but Al Davis was also something else.  He changed football in many ways and he did things that no one else had ever done.  Football will miss Al Davis.

Al Davis fought the law and Davis won.  In 1982, a six woman jury found in favor of the Raiders when they filed an anti-trust lawsuit against the NFL and the verdict was upheld when the Supreme Court refused to hear the case.  Davis and the Raiders were allowed to move  to Los Angeles WITHOUT the approval of the NFL owners.  Davis and the Raiders went to court against the league more than half a dozen times over the years.  They sued over the move.  They sued over the legality of the NFL constitution.  They sued Rams owner Georgia Frontiere over bugging her phone and conspiring to keep the Raiders out of LA.

Outside of the court actions, Al Davis eat, slept, lived and breathed football.  He was a college coach at age 21.  He was head coach of the Raiders at 33.  At the age of 36, he was commissioner of the American Football League.  By the age of 47, he was the majority owner of the Raiders.

Davis was the one who suggested that three NFL teams move to the AFL side of the board, Cleveland, Pittsburgh and Baltimore.  They each did move and took 3 million dollars each to do so.  Davis was not only the Raiders owner and general manager, but the defacto personel manager as well.  He controlled all the decisions the team made on every level.  He was at practices.  He gave advice on the actual coaching.  Al Davis was the Raiders from top to bottom.

From the mid 60s to the mid 80s, Davis and the Raiders made a reputation for themselves of finding and signing “outlaw” players.  Those that other teams didn’t want.  Those who were considered to play “dirtier” than others.  Those that other teams considered troublemakers or perhaps having lesser abilities.  But in the mid 90s when the NFL instituted the free agency/salary cap system that put an end to Davis’ ways of finding and signing these players.

Over the past several years, the Raiders and Davis have both declined.  The Raiders have had several years with losing records and the Jamarcus Russell debacle was extremely devastating to the team as well.  It seemed that as the team suffered so did Davis who had put his heart and soul into the franchise.