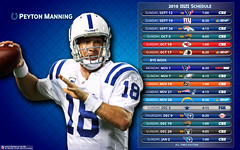 Peyton Manning isn’t retiring, as far as we know.  However, Rob Lowe tweeted that he had heard that Peyton was retiring.  I like Rob Lowe, but I didn’t know that he was Adam Schefter.  I mean, I guess they kind of look alike, but I didn’t imagine that we’d have Lowe sitting in for the Mort Report.  Right?

No one has responded except to say Peyton isn’t retiring.  So, why would you tweet this stuff?  Is this some kind of play for publicity because you’re on TV?  I mean, it would work.  I’m sure it has worked.

It should also be noted that Lowe is friends with Jim Irsay, the owner of the Colts.  So, is this some kind of conspiracy to put out the idea that Peyton could or should retire?  Why would you even do that?  I guess if you want to pick Andrew Luck and enjoy just that, then you would need to push Peyton out the door.  However, that’s a pretty big conspiracy for an NFL team to undertake.

Maybe Rob Lowe just thinks that he has some information because he happens to know the owner of the team?  Maybe he’s just a goofy person.  Maybe he’s missing the spotlight?  I don’t know.

That’s true, and I also think it’s interesting that the person closest to the source knew nothing about it.  So, for now, I am going to have to go with conspiracy.  There’s no other reason to do this.  I don’t think he’s going to retire.  Not yet.  I think he wants to try the neck out first before he makes a final decision.  Otherwise, he’d be jumping the gun–like Rob Lowe.