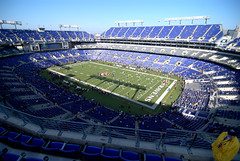 I love good-feelin’ sports stories.  Michael Oher was going nowhere and a family took him and gave him a chance to make something of himself.  Then he went to Ole Miss and became a 1st Round Draft Pick.  NOW, he’s with a very good Ravens team on a very good offense and John Harbaugh has moved Oher to Joe Flacco’s Blind Side.

The Ravens made a switch where Oher went to Left Tackle and they moved the older Jared Gaither to Right Tackle.  The team commented in a very conventional way:

“We’re going to do whatever we can to get the best group out there that makes the offense the best it can be.” Plus, Gaither gave an equally traditional–and classy–response:

“I’m happy to play wherever I’m going to help the offensive line and the team. I’ll play kicker if I can make it on the field.”

I love that attitude!  So rare in pro athletes these days.

So, besides the fact that the Ravens think this will be the best move for them it is pretty much a marketing coup.  Oher is the subject of the hit movie “The Blind Side”.  I’m assuming you know this because if you didn’t then you were either living under a rock, exploring the super-heated ocean of Saturn, or you just got done meditating for 5 years straight in a Buddhist temple.

So, with Oher being the subject of a movie for which Sandra Bullock won an Oscar and the whole thing still being a big deal they can extend the attention they’re getting by actually putting Oher on the blind side.  Now they can extend this frenzy for another year as Oher plays his first NFL season at the position.