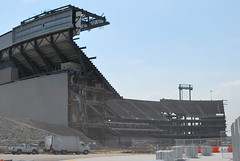 I’m not going to complain about the weather.  I’m not going to wax poetic about sun and fun in Miami–that would sound really stupid.  I will, however, talk about the whole process and what it means to get a Super Bowl and why New York getting the 2014 Super Bowl seems a little suspicious.

Listen, I get the idea behind the Super Bowl.  Everybody and their mother wants to go to someplace warm and have a weeklong vacation waiting for the game.  I get it.  Players in the game can bring their families down and their kids can have a nice vacay while daddy gets sequestered to play the game.  Media row can be ENORMOUS and you can have everyone there because everyone wants to be in some sunny and warm place.

However, football is played outdoors and even if you had the Super Bowl in Miami every year we’d still run the risk of catching a late hurricane or of it raining all week.  So, I’m not sure what the problem with cold weather is.  I saw some old-timers doing an interview on the 4-letter network and they basically said, “Shut up and play the game!”  They don’t care if it’s -59 degrees outside–and neither should we.

Having the Super Bowl in New York only means two things–it’ll be colder and the players will have to drive across the river to find the classy hookers.  In case you’ve never seen it the Meadowlands is right on the river and you can see Manhattan clearly from there.  That’s all.  Otherwise, it’s the same as any other stadium–only it’ll be new this time around.

Have the game in a new stadium–hell, have it in Indy with the roof open–who cares if it’s cold.  Just because people overpay for the tickets does NOT mean they have a right to comfortable.

It’s football–there’s no whining in football!