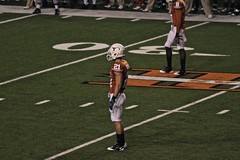 Colt McCoy had to wait until the 3rd Round to go to the Cleveland Browns yesterday and it kind of shocked me.  Think about how far he fell compared to where he was before his arm went “dead” in the national title game.  However, he may have landed in a nice situation with a completely revamped Browns team.  Jake Delhomme just came to town and that means McCoy is the protege–but for how long?

With Mike Holmgren bringing in two new Quarterbacks and getting rid of the two old ones he had I guess he figures he isn’t teaching any old dogs any new tricks again.  I thought perhaps he would want to get in the trenches with everyone and try to fix some thing, but that doesn’t seem to be happening.

That must mean that Delhomme is on a short leash and his primary job may be to teach Colt McCoy–if he can.

The question would be if McCoy is going to get thrown out there fast or if he will be kept behind a veteran until such a time as Holmgren thinks he’s ready to go.  If I were going to pick someone to keep a young QB on the bench it would be Mike Holmgren, but I don’t know how much peer pressure affects this area.

He may see the other young QBs in the league playing well and just go for it.  The NFL is a league of trends and Holmgren isn’t blind–I don’t think.

For my money, I think Delhomme isn’t going to last long and McCoy is going to find the field sooner rather than later. Holmgren can blame alot of problems on Eric Mangini and kind of keep McCoy on the bench as long as he wants without inciting the fans.  I bet he uses that to his advantage.