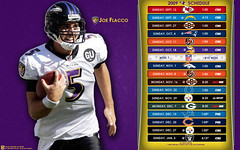 We keep hearing the news that, while Baltimore has played well this season, Joe Flacco and the Ravens offense isn’t that great.  Ed Reed said almost as much on the radio when he answered questions about Flacco.  He thinks, rightfully so, that Flacco is along for the ride.  However, the ride isn’t any better for Matt Ryan.

See, we have a MAJOR homer problem in Atlanta, and even sports talk radio hosts think that, somehow, Matt Ryan and Joe Flacco are somehow different.  The Falcons defense isn’t great, but Matt Ryan has done FAR less than Flacco in this league.  However, somehow, Flacco gets all the grief even though the Ravens have won playoff games, been to the AFC title game, and are in good position to make it to the Super Bowl.

So, why is it that Matt Ryan is worse than Joe Flacco?   I just know the facts.  Mike and Mike, on ESPN Radio, do confidence picks.  Flacco and Ryan were at the bottom of the list, but at least they could agree that you could flip-flop the two based on the day, the weather, the opponent, etc.

So, why do Atlanta fans, some of them, believe so much in Ryan when he hasn’t done a doggone thing?  Because they’re happy about the four straight winning seasons.  We can attribute most of that to Mike Smith and the Falcons front office.  The Falcons have better weapons that Ryan does less with.  That’s how it works.

So, standards are low in Atlanta because it’s just a low standards kind of town.

Let’s just be honest, both of these kids are nice players, not great, but pretty good.  They can’t put a team on their backs and they need help.  That’s fine.  I can live with that.  So, can we stop bashing them all the time and just recognize that they’re good enough and be done with it?