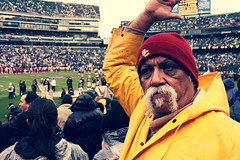 Albert Haynesworth has already made waves in Washington by wanting to be traded and basically not wanting to do anything this offseason.  Mike Shanahan doesn’t get it, some of his teammates have called him out and now it seems that Dan Snyder is over it.

Some might think that Haynesworth doesn’t like the new crew at the top with Bruce Allen and Mike Shanahan running things, but only an idiot would be unhappy with the current regime in Washington.  Dan Snyder made that pretty clear when he commented on the change in leadership:

I think he’s totally right.  He got smart and didn’t just spend money–he made the right moves.  However, he’s gotten more savvy because he took a dig at Haynesworth by implying that he isn’t a team player–I like this one:

Basically, he said, “Does this son of a bitch know how much I’m paying him?  He needs to get his fat ass in here and work like everybody else.”

I wonder how close he is to taking the cap hit and cutting Haynesworth.  Don’t you think Snyder might have turned a corner and become a really good NFL owner almost overnight?  I think he might have.  These comments say, “I’m not just a jackass–I’m a smart jackass”.

I can live with smart and if you’re a Redskins fan you should live with it too.