I made my predictions for the AFC and NFC, but I thought I’d give a week by week prediction for the Green Bay Packers. There are a couple reasons for this. One, is that the Packers have been my team since I was a kid, so I have a special interest in them. Second, sportscasters, like Peter King, are predicting big things for the Packers this year. King even thinks they will go to the Super Bowl. 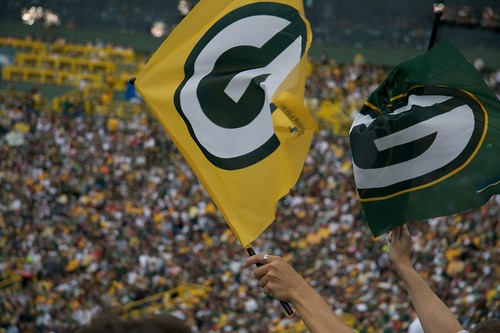 I’m not quite that optimistic, although I do think the Packers have a great team. There are big predictions for Aaron Rodgers, but I still think he needs a year or even two before he is at the level physically where he seems to feel that he is now. Remember that sat behind Favre for five years, and that isn’t the same as playing.

So I think he is a good quarterback now, but as good as he needs to be to beat some of the higher caliber teams? Not even close.

The Packers have rid themselves of Aaron Kampman this year, which is supposed to fit into their 3/4 defensive scheme. I disagree with this choice, and think that the defense is going to have to step up to this scheme which has been talked about more than it has produced thus far. I do not think they will lead the league, but the good part (if you can call it that), is that the Packers are in the worst division in the entire league.

Here are my predictions, week by week:

Sun., Sept. 12 @ Philadelphia Eagles
Win: Philadelphia will have some problems this year, and the Packers will be ready. This will be an easy win.

Sun., Sept. 19 Buffalo Bills
Win: The Packers are going to be riding high from their first week win, and as the season home opener this game is in the bag.

Mon., Sept. 27 @ Chicago Bears
Win: The Bears have a quarterback problem in that they traded for a guy who got his nose out of joint in Denver. He took his crappy attitude to Chicago, and got compared to the other gunslinger in the league. Problem is, Jay Cutler isn’t as near as good as Brett Favre. Packers will win this game, even with it being at Soldier Field.

Sun., Oct. 3 Detroit Lions
Lose: Here’s my crazy wild pick of the year. The Lions are going to be a good team this season, and the Packers are going to go into this game overconfident. They will lose.

Sun., Oct. 10 @ Washington Redskins
Lose: Second crazy pick of the year. I think the Skins will be a surprising team this year, and the Packers will be unprepared.

Sun., Oct. 17 Miami Dolphins
Win: This game will be a close one, but the Packers will pull it out late in the game.

Sun., Oct. 24 Minnesota Vikings
Lose: Brett Favre or no, the Vikings are a force to be reckoned with this year. They will win easily.

Sun., Oct. 31 @ New York Jets
Lose: The Packers might have had a chance with this one if they were at Lambeau. But at New York? It’s a loss.

Sun., Nov. 7 Dallas Cowboys
Win: Cowboys aren’t going to be that great this year, and November at home I think they’ll pull it out.

Sun., Nov. 21 @ Minnesota Vikings
Lose: Less than a month after losing from the Vikes once, they’ll do it again.

Sun., Nov. 28 @ Atlanta Falcons
Win: The Falcons have gone through quite a bit in the last few years, and I do think they’ll get back to being an elite team, but it won’t be this year. Packers will win this one.

Sun., Dec. 5 San Francisco 49ers
Lose: 49ers are going to be a surprise team this year. They’ll be up more than they are down, and this will be one of their up weeks.

Sun., Dec. 19 @ New England Patriots
Lose: The pressure of a national Sunday night game against the Patriots? I don’t think so. It’s a loss, folks.

Sun., Dec. 26 New York Giants
Lose: December at Lambeau field? That ain’t nothing for the Giants.

Sun., Jan. 2 Chicago Bears
Lose: There was once a time where Lambeau Field was the toughest place around, especially in winter. Not anymore. The Bears lost to us once this season and will round out their incredibly crappy year with a win against the Pack.

Final result? 7-9. It will be a sucky year. But remember what I said about the Pack being in the worst division in the league? This will save them from being in the absolute bottom.