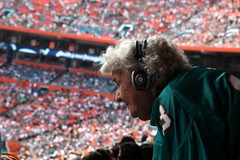 It’s pretty amazing when a team does a complete transformation, but that’s essentially what has happened with the completion of this trade.  The dolphins sent Ted Ginn Jr. to San Francisco for a 5th rounder.  Remember, this guy was the #9 overall choice–then the Dolphins went 1-15.  That was Cam Cameron’s death knell.  NOT the 1-15–it was this draft pick.  Even back then I thought it was a weird choice.  Did the Dolphins really need a receiver who shouldn’t have gone that high?  Nope.

Now, they’ve sent away the former #9 overall–not that long ago–for a 5th rounder.  That’s the same pick the Steelers gave up for Santonio Holmes.  So, is that way this works?

You have to decide what you truly don’t need and part with it regardless of how bad it sucks or how much you are admitting, “Yeah, we’re stupid and we effed this one up”.

There’s no reason in the world that the 49ers can’t use Ginn either.  They gave up hardly anything for him and he can play the slot and catch some screens.  If he runs back a couple kicks and performs well on special teams then he was worth it.  Frankly, for the 49ers it’s a great trade.

Oh, and for the Dolphins it’s a better trade.

They have absolved themselves of all their former stupidity.  I’m proud of them.  The Dolphins SHOULD be good and SHOULD be making smart decisions.

Now, they have a 5th rounder–which would be more like a 3rd rounder in other drafts because this draft is so deep.  Think about the depth they can create on their lines with more picks.  They can create more opportunities for Chad Henne to get the ball to Brandon Marshall.  Doing that means their offense just got really dangerous.

Hello AFC East–you’re back–or at least the Dolphins and Jets are.