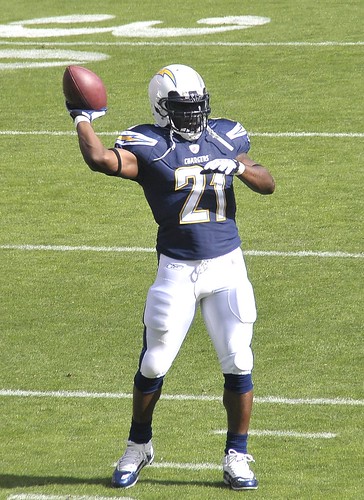 LaDainian Tomlinson has a new tattoo and the only good news is it isn’t barbwire and it doesn’t say “Mom.”

In fact strangely enough it is the logo of a team that he hasn’t played a single down for.  The tattoo is of course the design of the New York Jets logo and this notion has to make San Diego Chargers fans sick to their stomach.

Tomlinson claims he added the new ink in order to close one chapter in his life (the Chargers tattoo on his opposite calf) and open a new one in New York.   The former Chargers running back went on to admit that his experience and past existence with the Chargers is “kind of dead” to him and with the Jets he is currently experiencing “a new birth” as a football player.

The future Hall of Famer also declared that he would feel fine being just the third down back and would be happy with any role that Rex Ryan and the Jets coaching staff would give him:

“Whatever they need me to do, whether it’s catching the ball out of the backfield, whether it’s picking up blitzing linebackers or running draw plays or screens or what have you.”

I find this comment especially fascinating considering it was Tomlinson’s lack of being a team player that put him into this position of playing for a new team in the first place.  After all if LT had picked up a few blitzing linebackers from time to time in San Diego last year, he might still be starting for the team and receiving goal line carries.  And also if he didn’t pout on the sidelines when Darren Sproles or Michael Turner were running effectively in the postseason, he might still have a decent role with the AFC West powerhouse.

But considering his overall form dipped in the last few years as he approached 30 and his lack of interest in blocking for the QB (or taking a reasonable pay cut), LT was released because he appeared to have little invested interest in the idea of being part of a team.  Now in New York the former Charger will be battling with young stud Shonn Greene for the honor of carrying the ball.  This is a RB battle the former TD master is bound to lose because Greene is hitting his prime years and LT has surpassed the dreaded age of 30.

Tomlinson will likely need to be a role player if he wants to perform well in New York and his days of being the featured star running back are now long over.  Let’s just hope his days of being a Jet outlive those of another future Hall of Famer, Mr. Brett Favre.  Because if LT is just around for one or two insignificant seasons (along with a few forgettable TDs) then a tattoo of a Jets logo is about as good as one of your ex-wife’s name.  But in order to thrive in New York, LT must accept his role as a backup.

Or else he will have to invest in another tattoo parlor very soon.