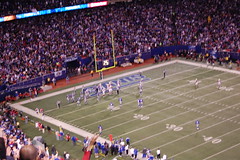 The Cardinals’ GM says he doesn’t want Marc Bulger.  However, Ken Whisenhunt says he never says never.  So, which is it?  Which is it going to be?

The reports came from somewhere and I think it might be Ken Whisenhunt’s desire to have as many options as possible.  Why else would this report get out after the Cards went and got Derek Anderson already?

“We are not actively engaged in discussion with Marc Bulger.  If he is interested, we’re appreciative, but right now, we’re focused on the guys that we have here. Matt has done a great job so far, but so has Derek Anderson and our young guys (rookies Max Hall and John Skelton).”

“I’ve learned to never say never. Who knows what may happen? (Coach) Ken (Whisenhunt) hasn’t made any final decisions on who will be the starter at quarterback. Right now, we’re not looking outside of our group. That’s not our focus.”

Which is it gentlemen?  You need a new franchiser–but if you don’t think Derek Anderson or Matt Leinart are it then why did you bring in Anderson and NOT trade Leinart?

I think we have a disagreement here.  The coach wants more options and the GM is happy with the team he put together.  Surely, this will end in disaster.

And when the Cards have the bad season they’re heading for then Whisenhunt will throw his GM under the bus faster than you can say “Matt Leinart sucks”.

I wish I had a way to get to the root of the problem and read Ken Whisenhunt’s mind, but then again I’m starting to think that he doesn’t really have alot of say in how the team is put together.  Right now, I think he’s pissed.

There’s something about this that just spells disaster.  Sorry Arizona.