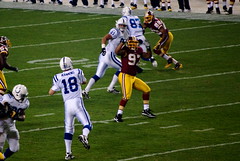 It took long enough, but the Indianapolis Colts finally fired Jim Caldwell on Tuesday, the latest member of the Colts organization to suffer the consequences of Peyton Manning getting injured.

Caldwell did a great job initially, talking over from Tony Dungy, winning his first 14 games, an NFL record for a rookie head coach as he  became only the fifth first-year coach to take his team to the Super Bowl.

In 2010, the Colts were battered by injuries but Caldwell still led his team into the playoffs. But the Colts could not overcome the injury to Peyton Manning this summer, appearing to be totally unprepared to have someone else step in an quarterback the side. Without their franchise quarterback behind center, the Colts lost their first 13 games and ending up with the number one pick in the draft.

Caldwell and his coaching staff have been in limbo since Jan. 2, when owner Jim Irsay fired club vice chairman Bill Polian and vice president/general manager Chris Polian and launched a search that resulted in the hiring of Ryan Grigson as general manager last Wednesday.

The decision on Caldwell was reached jointly by Irsay and Grigson.

“We just came to the conclusion that this is best moving forward for the franchise,” Grigson said, referring to his first major decision in charge of an NFL team. “Mr. Irsay is the steward of this franchise and I’m here to help him wrap his head around these types of decisions. We’ve been in football our whole lives and a lot of it is about instincts.”

It will be interesting to see who Irsay and Grigson hire as the Colts next coach. With the firing of the Polian’s it is obvious that Irsay has regained control of the franchise and will be making a lot of the big decisions over the next year. That sort of executive control will probably rule out big name coaches like Gruden and Cowher, who will want to have front-office control.

With the Colts expected to take Andrew Luck with the first round pick in the NFL draft, I would also be surprised to see them take a defensive minded coach. It would make sense to get an offensive coach who can work with Luck. That would see to rue out the likes of Wade Phillips, Dom Capers and Perry Fewell.

Who do you think the Colts will hire as their new coach?