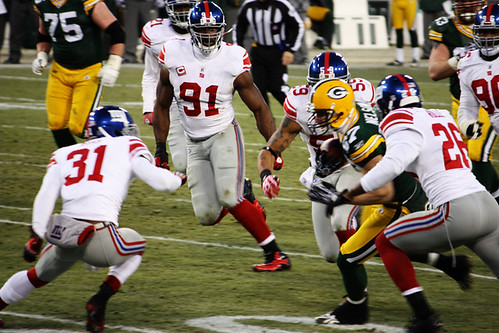 It doesn’t matter how prolific your offense is if they cannot keep control of the ball when they have it.  As long as they are putting the ball on the ground constantly, they are just opening themselves up for the other team to take advantage, to get the momentum, to score points.  The Giants were able to take advantage of some of the opportunities and just enough of them to turn the game in their favor.  Also, anytime you can keep a QB like Rogers or Brees or Brady on the sidelines, your opportunity to win increases exponentially.

Sometimes teams with the bye weeks come in looking as the Packers did, completely unprepared.  But other teams had a bye week, like the Patriots and they came in with focus, intensity and yes even new offensive play schemes.  The Packers had none of that.  They just kept putting the church’s money on the ground.

The Giants played hard.  Their defense was outstanding as usual.  They capitalized on enough opportunities to win the game.  The Packers beat themselves for most of the game though and in the NFL you cannot win if you do that.  The Giants now play for the NFC Championship and the Packers start their off season.  Not exactly where they expected to be right now, not at all.