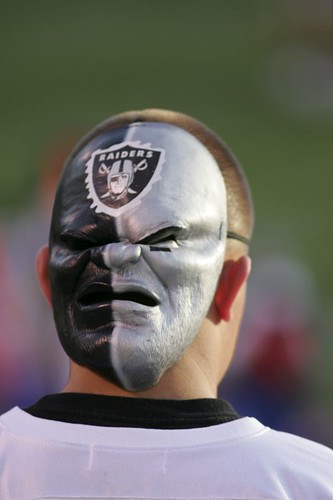 The Raiders are having a surprising season so far and one also filled with loss.  They lost their long time owner Al Davis and then they lost their starting QB in Jason Campbell to a broken collar bone.  But things aren’t all bleak for the Raiders.

Today, the Raiders have apparently traded for Bengals QB nongrata Carson Palmer.  The Raiders are apparently giving up two 1st round draft picks.  One for 2012 and one, conditional (if the Raiders win 1 or more playoff games this season it will be a 1st round pick, if not it will be a 2nd round pick), for 2013.  Palmer is out in California taking a physical today.  The trade is almost definitely a win or at least a perceived win (you can’t say it’s a win until whomever they draft plays and succeeds) but they have an opportunity for a win.  The Raiders success in this trade is yet to be determined.

There are those who would say and have said that the Bengals problems the last couple of seasons were on Palmer.  I disagree.  Yes, he has had some issues and most importantly injury issues.  But I do believe that the Bengals issues in recent seasons were a result of chemistry and management.  Both of which were bad….to the point of being toxic.  There were two overblown egos at wide receiver who were more focused on their reality show and Twitter than the game and a QB who was tired of being constantly yelled at by said receivers for not throwing to them 100 times a game and by management for not winning.  Palmer wanted nothing to do with the Bengals franchise after that to the point of retiring.

The Raiders on the other hand are having a resurgence of sorts.  They are in second place in the AFC West behind the Chargers who sit at 4-1 overall while the Raiders are 4-2 overall.  The Raiders lost by 3 points to the also resurgent Bills and were beaten resoundingly by the Patriots.  Their remaining schedule has a lot of opportunity for wins amidst a few losses.  The Raiders have to play the Chargers twice and the Packers once.  Games that they could win, but in all likelihood won’t.  That still leaves 7 to 8 games, depending on how you see the Lions game going, that they could win.  Let’s say they win 8 games more, that would make them 12 and 5 and in all likelihood get them into the playoffs.

Of course, this is all contingent on whether Palmer passes his physical and if he does, how he performs on the field and meshes with the team.  If he does well and the Raiders get into the playoffs, then this is a win for them.  But those 2 draft picks may come back to haunt them.  Overall, the Raiders have given up 3 picks in next year’s draft for 3 separate quarterbacks.  The Raiders now have no picks next year until the 5th round.  Oakland also  has to pick up all of Palmer’s remaining salary for 2011 — he was set to earn $11.5 million over a full season. Palmer’s contract actually runs through the 2014 season, and he’s still on the books for $38.5 million over that time period.  Jason Campbell is a free agent after this season and may  have seen his last down in a Raiders uniform.  The Raiders also have Terrelle Pryor on the bench waiting for his turn.  But what they won’t have is a pick in the first 4 rounds of the draft next year.  They better hope what they have will suffice and hope to make the playoffs.  I think one of these two is possible and the Raiders just may see the post season for the first time in a long while.