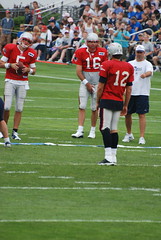 Ok, the Patriots have had issues in the playoffs in the past.  They haven’t really done anything significant since 2007, and that was a loss.  However, they had gotten away from what they did best when they won three Super Bowls in four years.  They’ve moved quickly to those three titles (and two in a row) because they were not a superstar-laden team filled with major offensive pieces that scored a ton of points.  They had a guy playing offense and defense because they were so short on talent on the depth chart.

Back then, they had good players outside of Tom Brady, but you didn’t know most of their names.  As soon as they got into the superstar business, they started losing pivotal games.  Now, they are right back where they started.  They don’t have much going on besides Brady.

Sure, they have some names people know, but now we have Twitter and Facebook.  Back then, it wasn’t like that.  They just had a couple guys you might have recognized, but they won all the time.

Now that this team is low on the depth chart, especially for the defense, they are back on top.  Their defense sucks on the stat chart, but the defense gets the job done well enough for the team to have the number one seed in the AFC.  So, they can’t be that bad, right?

We need to think harder before we write off the Patriots.