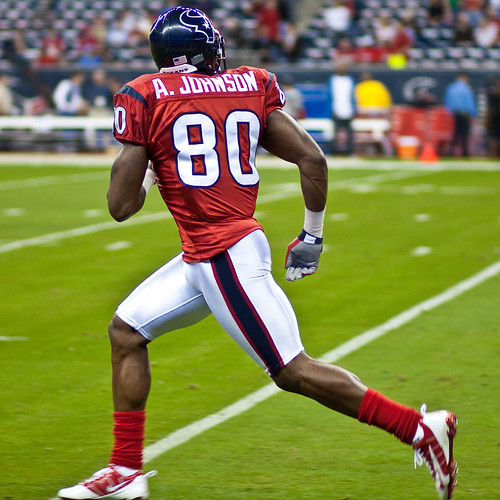 The Texans premiere wide receiver Andre Johnson almost caught a break today.  A break of his finger that is.  Instead he got a dislocation and a bone through the skin.

Johnson at practice on Tuesday went up for a ball and hit the tip of his left index finger on the ball and dislocated it.  He said that at the time his finger just didn’t feel right when he made a fist and he had a glove on at the time.  He said he looked at it and it looked kind of ugly so he just popped it back in place.

He kept going at practice and then the sweat from inside his glove started burning where his finger had been injured.  So, he took the glove off and it started bleeding.  Apparently, the dislocation was so bad that it caused the bone to come through the skin.

Johnson was taken to the hospital where he did not need stitches.  He was told that the cut would need about 3 days to heal.  The finger was put into a small splint and heavily bandaged.  He was told that once the cut is closed that he can start practicing again.  Johnson is hopeful to be back on the field by the weekend.

Johnson suffered through most of last season with a high ankle sprain but seemed to take this latest injury in stride with some humor thrown in as well.

While the dislocation is more serious than first thought, it does appear that it won’t sideline Johnson for long.  This time it looks like he really did catch a break.